Recently I saw this meme about Spanish soccer player Sergio Ramos and his beard. The meme shows a young and clean-shaven Ramos looking slightly confused and insecure verses an older and much more confident Ramos with a beard. It got us in the office wondering if men actually grow beards for the same reason women put on makeup.

Before I go on, I want to acknowledge that some people get triggered by this concept. "A beard is natural, it's nothing like make up", they say. That's true, beards grow naturally but that's not the point. The point is that your facial hair can drastically change the way you look, just like make up can drastically change how girls look. We raise this comparison only to get you thinking about how you can use your facial hair to craft your own look. It's not about endorsing make-up or saying that growing a beard makes you like a chick.

Women have been experimenting with cosmetics on their face since the ancient Egyptians where women would paint their eyes with soot. Makeup is able to contour, define, conceal, shape and enhance the face. Physically, the beard can arguably do the same thing. It can define and enhance a man’s jawline, conceal blemishes and shape the face. But I think beards and makeup extend further from their physical role and also play an emotional role.

Throughout history and even in modern day, reports suggest that women wear makeup for a number of reasons. These include many personal reasons like they want to express themselves differently, it’s fun, it’s become a habit, the application process is like meditation, and it gives a lot of women more confidence.

These reasons are very similar to why I and many other men grow a beard. It’s fun and it is a way I can express myself. I remember in the very early stages when I first decided to grow a beard and I shaved it off for some stupid reason. My face felt exposed and my confidence was definitely down. I couldn’t wait until I grew it back again. I also was one of the first amongst my friends to let my facial hair grow out, and it became a new identity for me.

Most women will probably tell you that they wear makeup for themselves, however some surveys show that women wear makeup for others to perceive them differently. Some say they just look better with it. For women, makeup can be used as a mask or a tool to enhance their features to attract a partner or look more self-confident. But is this the same for men? If makeup has all these benefits for women, why don’t men just wear it?

I guess it’s a mixture of child psychology and evolution. From a young age, girls are bombarded with the idea that they are supposed to look a certain way, which is encouraged by Disney princesses and that free lip gloss in a pink magazine. Boys simply don’t have this. Instead they are encouraged to play with toy cars and play sport. Evolutionary speaking, facial symmetry, plumped lips and red cheeks are all signs of attractiveness and sexual arousal. On the other hand, women are not attracted to these same traits on men. Pink cheeks and bright red lips can look odd on a man. Instead, signs of masculinity are much more attractive to women, like a chiseled jaw and some facial hair. Also, as stated in a previous blog “Baldness and the Beard,” studies reveal women are attracted to facial hair as it is a sign of non-threatening dominance.

In addition to this, men don’t have cosmetics companies preying on their insecurities like women do (at least to the same extent). Women are happy to spend a lot of money if it achieves their best possible version of themselves. Men simply have nowhere near the same interest in spending money on their looks. It probably goes as far as some simple shave or beard products.

For the most part, there has become a social and gender role for men and women. Women wear pink, men wear blue. Women drink wine, men drink beer. Women do ballet, men play footy. Women wear makeup, men don’t. The thousands of different makeup products allow women to experiment with their look and define themselves in a unique way. Men do not have this opportunity, so how do they express themselves? They grow facial hair. Facial hair can be fun and unique – you can grow stubble, a full beard, short beard, or a goatee, just to name a few: 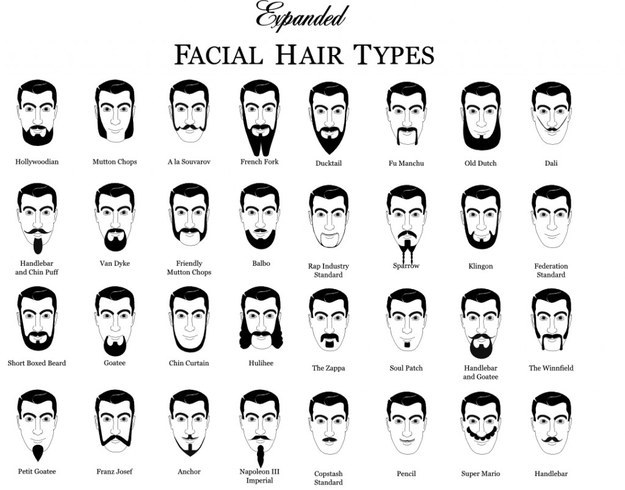 But as men grow beards to define their own appearance and women wear makeup for the same reason, we are naturally playing to these gender roles. By trying to be unique in using what we can grow or can attain, we are naturally blending into society. In the words of Calvin Klein “The best thing is to look natural, but it takes makeup to look natural.” This quote can be extended to men as well. We have become so familiar in seeing women with makeup and men with beards, this is now the social norm. However, this I not a bad thing. It is popular to grow facial hair and wear makeup because we know and it has been proven that it is attractive and helps us with our own confidence. I think it is the very slight and subtle differences in our appearances that ultimately separate our styles and looks from each other, even though our overall fashion and image choices are the same or influenced by each other. For example, if you take notice of other guys, a short back and sides haircut with a groomed beard is in vogue right now, and this image is very similar across a lot of men. However, the differences come with hair textures, shape and styling capabilities of hair and beard. Just like with makeup, it is the variation of appearances that define men.

Back to Sergio Ramos, you can see a new-found confidence in his face pre and post beard. I believe a lot of men can relate to this. A beard can act like a physical mask that can hide skin imperfections, but with this mask comes the removal of anxiety. It creates a new point of interest that detracts from any of your insecurities. It emphasises our masculinity and puts us in a natural frame of mind. Just like women apply makeup to look youthful, healthy and attractive, men want to look dominant and masculine and to achieve this many have to grow a beard. In doing so, we feel more confident about ourselves.

To put it simply, a lot of men will say they grow a beard because it looks good and it suits them. If you care about your appearance (because whether you like it or not, people will judge you by your appearance), then your facial hair can be a powerful way to send a message that you're a man who's on top of his game.

2.  Essentials for the Bearded Traveller

5.  How to Sculpt your Beard

6.  Best Beard Styles for the Office